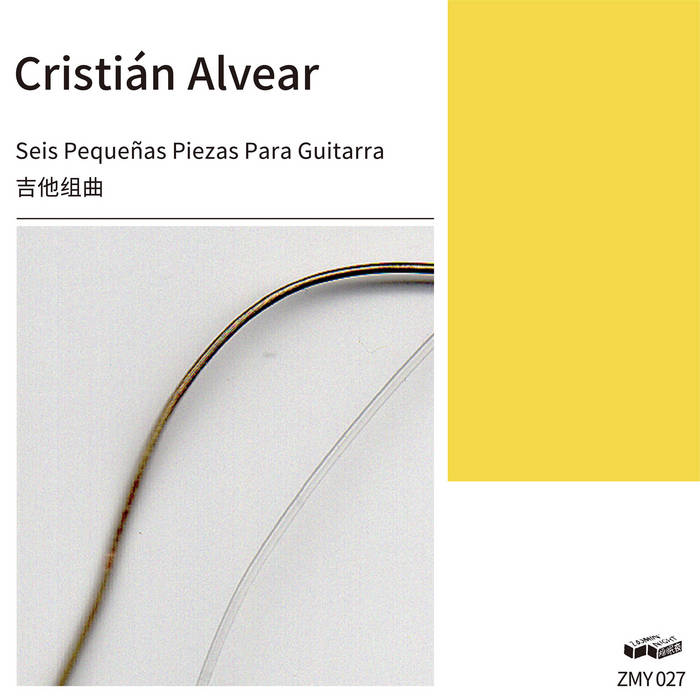 Chilean musician dedicated to the performance, premiere and recording of experimental and contemporary music. He serves as curator of the experimental music festival Relincha, in Valdivia, Chile and he conducts, along with Santiago Astaburuaga, LOTE, ensemble whose work is based on performing and premiering experimental scores. Constantly performing in Chile as well at international festivals and concert venues in Europe, South America and Asia, over recent years he has concentrated its efforts in performing educational concerts in rural areas of the Los Lagos region, in southern Chile. His work has been published by Edition Wandelweiser Records (DE), Irritable Hedgehog (US), Another Timbre (UK), Potlatch (FR), 1000Füssler (DE), Mappa (SK), Lengua de Lava (MX), Caduc (CA) and B-Boim Records (Austria) among others.


An interview with Cristián Alvear by Zhu Wenbo

I started when I was 12 years old. That year, for my birthday, my father gave me an electric guitar and since then I never stopped playing the instrument. A few years later, when I was 17, I met guitarist Mauricio Carrasco who became my first classical guitar teacher, I learned a lot with him. Then, on 2000, I came to Santiago to study with Luis Orlandini at Universidad de Chile. I also did my master’s degree with him. On 2013 I was getting really bored of contemporary music and my few incursions with improvisation proved to be not as interesting as I was expecting. So, when I met Nicolás Carrasco from whom I borrowed some scores, everything took a somewhat drastic turn: among those was Antoine Beuger’s ’24 petites préludes pour la guitare” and a wide range of new music unraveled before me. Since then I’ve been incredibly lucky, I’ve been able to travel and meet a lot of people to work with.


I found that, mostly you play composition works in live or studio. Maybe only the duo set with Seijiro Murayama is improvisation. Why composition is so important to you?

I’m classically trained so, as you may imagine, repertoire has been crucial on my formation as a musician, it’s basically what I learned to do. I like repertoire because it present certain problems that you need to figure how to solve, how to do to make it sound as you want. Also, you play different styles of music, from renaissance pieces to experimental music, so if you’re willing to, you can learn a lot.


Who’s composition works do you play for most?

It depends, It’s something that is always changing. Nevertheless, for the last two years, I’ve been playing a lot of Takemitsu’s guitar music. I’ve been also playing a lot of music written by Chilean composers Nicolás Carrasco and Santiago Astaburuaga.

Recently I’ve been playing my music more often. As for these exchanges, yes, I do that often, I think it’s an important aspect of this community of musicians.


Will you ask for some personal explain from these composers? Or, maybe you just try to understand them in your own way?

It’s difficult to generalize on this because it depends entirely on the score and the composer. In any case, I usually try to do things on my own at first, to develop a personal perspective regarding the piece I’m studying, only after that I feel I can start a dialogue with the composer and maybe send him or her a preliminary recording.


Will you make any special focus or miss point while play other composer’s works?

It depends on the piece.


This cassette work is your own composition. To me I feel that, it is much more in a traditional way. Or maybe we could say, it is much more a musician based work, focus on notes (maybe we don’t say melody), but also the skill of guitar playing. How do you think about it? Would you like another musician to play your work?

With this piece I wanted to widen the scope of the possibilities of iteration, tuning and permutations. There’s no focus on melody whatsoever but on timbre and resonance. I don’t know about skill because I just do what it feels natural on the guitar to do. As for someone else playing my music, I’d love that to happen, in fact, Nick Ashwood is trying “pieza para guitarra afinada”.


And I also want to ask about Taku Sugimoto. You have played with him before, and you always played and shared his work in internet. As a guitarist, how do you think about his work or his playing? Please share us some personal views or experience.

Talking, working, playing and drinking with Taku has been a tremendous influence for me. He’s not only a great musician but also a generous and kind person, always open to talk, to share and listen. I feel very lucky to be able to work with him.


And finally, please tell about Nicolás Carrasco and Santiago Astaburuaga, the cassette dedicated to. Who are them? Why are them? Maybe you could also introduce us about the Chile / Latin America scene.

Both are great Chilean composers, I admire their work very very much. I’ve been working with them for quite some time now and, without their help, I wouldn’t be able to do what I do, that’s why the piece is dedicated to both.
Chilean scene it’s still quite small, although there are some venues and some festivals for experimental music. In fact, I help curate one of these festivals, it’s called Relincha Festival and it takes place in southern Chile.. There’s also Tsonami, a very big festival, but I don’t find it particularly interesting.
As for the importance of Nicolás and Santiago in this scene, I would say it’s paramount: not only they contribute with their music but with a way of thinking and reflecting upon this practice of music making.